PowerPhotonic’s unique laser ablation process technology has a number of benefits compared with traditional optics manufacturing methods.  Comparing their properties allows the most appropriate process to be chosen, based on application requirements.

Lenses can be produced by direct grinding and polishing using specialist machines.  Although micro-machining and milling have been around for many decades, the advent of the cold war and subsequent defense spending has pushed the technology to a point where the capability to form complex micro-optics has become a practical reality for commercial applications.

Micro-grinding is widely used in the generation of rotationally-symmetric aspheres, and can be supplemented or replaced by the ultra-precision material removal of magneto-rheological finishing.  It is now possible to create high precision  aspheric lenses with high geometric accuracy (form error better than 100nm peak-to-valley) and low surface roughness (10 – 50 nm.)

Micro-grinding is also widely used in the fabrication of parts with translational symmetry such as acylinder lenses and cylindrical lens arrays, both of which are widely used with high power diode laser bars and stacks.

Ultra-precision machining using micro size diamond cutters can be used to create true 3D optics with relatively easy setup and fast turnaround. Micro milling and grinding technologies can be used for the production of plano, spherical, aspheric, conformal, and freeform optics.  However, there are a myriad of wear mechanisms in micro-machining including stress related phenomena such as fracturing, abrasion, spalling, delamination, and thermally activated phenomena such as dissolution, diffusion, chemical reactions and adhesion, all of which hinder its use for volume applications.

Precision molding is well suited to low cost and high reproducibility for large and medium quantities.  The foundation of the technique is the micro-machining process described earlier.  Heat and pressure are applied to a glass “gob” to create a shape in the form of the mold. 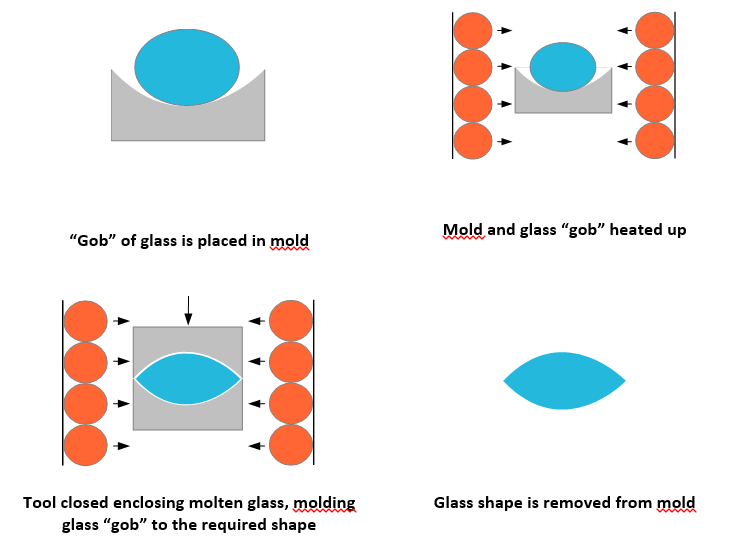 Lithography involves spin-coating a layer of photoresist over the surface of a glass or crystalline wafer (the substrate), patterning (exposing and developing) to produce a 3D structure in the resist, then etching to transfer the 3D structure into the substrate.  Typical wafer dimensions for lithographic optics are 150-200mm diameter and 1mm thickness.

Patterning can be carried out using a number of different methods.  Binary masking plus resist reflow allows the creation of a restricted set of lens arrays.  True grayscale patterning, using either a grayscale mask or a direct-write (e.g. electron-beam) technique, allows the generation of arbitrary surface profiles, within process limits.  Developing the resist involves hardening by baking then and wet chemical processing to remove exposed and hardened resist, leaving behind a layer with a patterned 3D structure.

The wafer is then exposed to a reactive plasma that etches the resist and substrate material at different rates, transferring the 3D shape patterned into the resist into a scaled version of this shape in the substrate, the scaling being determined by the selectivity of the resist.  The most widely used etch processes allow sag up to a few tens of microns, while some specialist deep-etch processes can approach 100µm etch depth.

The main benefits of grayscale lithography are the flexibility in the range of freeform shapes it allows. Grayscale lithography is widely used to make arrays of spherical microlenses.  One of the main disadvantages of this approach is the high cost of first parts, driven largely by the cost of the grayscale mask.

The cost and lead-time of first prototype parts is often seen as a significant barrier to the development of optics: high NRE and long lead times prevent design iteration and force the adoption of conservative designs, restricting the opportunity to fully exploit the advantages that freeform optics can bring.  Ideally, a fabrication process would allow rapid prototyping at low cost and permit scaling to volume without having to re-engineer the product.